The following is a contemporary account from the unit historian

In March 1918 the Battalion was at its best as regards numbers and morale. Dr Bean, in the ‘Official History of the A.I.F.’ records that “he passed at Noyelle our 51st Battalion very strong numerically and looking grand” and that “the 13th Brigade, including the 51st Battalion contained a large number of young recruits recently received, but marching full of confidence, helmets cocked and cigarettes in mouths.”

Then a month later came the historic counter-attack at Villers-Bretonneux. On the evening of the 24th-25th April 1918 “an attack” says the Official Historian “that brought great fame to the Australian Infantry. Before sunrise this cold clean stroke had relieved the Allies from the anxious situation existing at sunset. The swiftness and finality of the decision which it imposed and the success obtained here caused it to be cited as the most impressive operation of its kind on the Western Front”. It is well known that this counter-attack effectively halted any further westerly advance of the enemy.

Such successes, unfortunately, can only be gained at great expense in human lives. On the morning of the 24th April, the ration strength of the Battalion was 844, and the casualties were 43.2% of that number, or 365. No wonder therefore that the survivors saw fit to erect a wooden cross at the spot near to where this large number of Western Australians paid the supreme sacrifice. The cross was made by Horatio and Ted Julian, English cabinet makers, from timber of the nearby destroyed church in the village of Blangy Tronville. It was painted by Walter Rich and was transported to the scene of its erection by Joseph Tunnercliffe, MM. Chaplain Donald Blackwood MC conducted the service. The Commanding Officer, Lieutenant Colonel Robert Christies DSO had previously selected the site and marked it with a stick. The cross was erected at this spot by a working party from the Battalion under the command of Lieutenant Reginald Wood. The cross remained at this original site until the establishment of the Australian War Cemetery at Villers-Bretonneux.

The ruins of Villers-Bretonneux as seen from the German lines, 1918
Due no doubt to the excellent state of preservation and the great sentiment attached to the cross, when the Australian War Cemetery was established at Villers-Bretonneux, the Australian War Memorial arranged for the cross to be sent to Australia. The cross was offered to and accepted by a Citizen Force Militia Battalion and actually handed over to the 30/51 Infantry Regiment at a ceremonial parade at Liverpool Camp, New South Wales on Sunday 24 September 1933. In the following year the cross was placed in St. Anne’s Church Ryde NSW – Ryde being the Headquarters of that Militia Unit. Some several years later the Association heard of this action and being of the opinion that the cross should be located in PERTH, commenced negotiations for its transfer. The success of these approaches was largely due to the persistent and devoted efforts of REG WOOD, the then secretary of the Association – the same Lieutenant who had officiated at the erection of the cross on the field at Villers-Bretonneux.

Return of the Villers-Bretonneux Cross

So the cross came to its final home and resting place in the Cathedral situated in the Capital City of the State from which came the men of the 51st Battalion. It is noted that Chaplain Blackwood who dedicated the cross when originally erected in France had retired to Tasmania (after serving many years as Bishop of Gippsland) came to Perth and rededicated the cross on Remembrance Day, 11 November 1956.

The Cross was returned to France on ANZAC Day 2008 for a dawn service at the Australian War Memorial. The Cathedral Choir and clergy accompanied the Cross and the Choir sang at the service. A replica cross made of Donnybrook stone was also taken to France, and erected outside the church at Villers-Bretonneux.

When the Cross came back to Perth it was mounted on a new, more permanent display.

The Cross rests as a token of remembrance and provides an opportunity for relatives and friends at any time, and the Association at appropriate times, to pay tribute at the Cross which was originally erected on the ground in which their loved ones and their comrades were laid to rest. 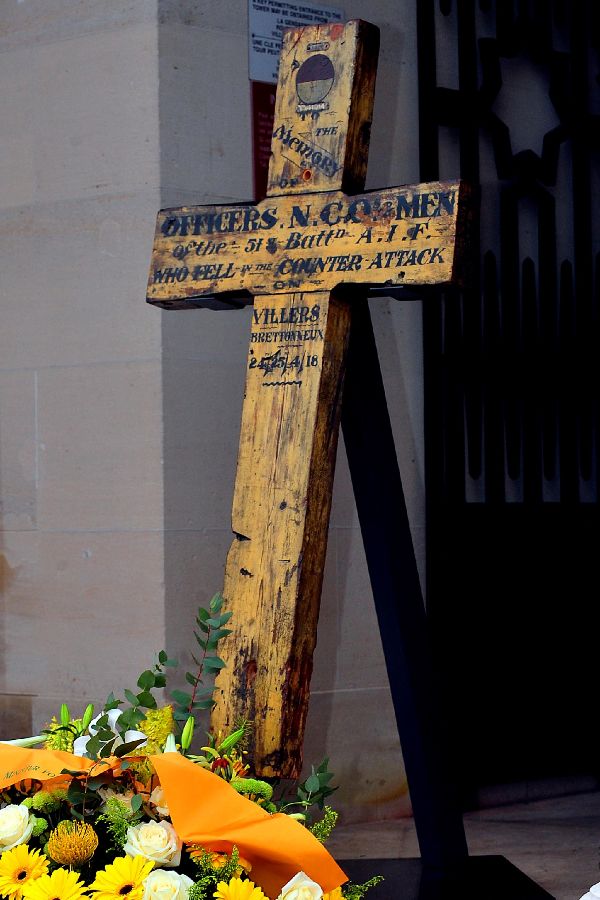 Sadlier and Stokes medals – with citations

CITATION: For conspicuous bravery during a counter-attack by his battalion on strong enemy positions.

Lieutenant Sadlier’s platoon, which was on the left of the battalion, had to advance through a wood where a strong enemy machine-gun post caused casualties and prevented the platoon from advancing. Although himself wounded, he at once collected his bombing section, led them against the machine-guns, and succeeded in killing the crews and capturing two of the guns. By this time Lieutenant Sadlier’s party were all casualties, and he alone attacked a third enemy machine-gun with his revolver, killing the crew of four and taking the gun. In doing so he was again wounded.

The very gallant conduct of this officer was the means of clearing the flank, and allowing the battalion to move forward, thereby saving a most critical situation. His coolness and utter disregard of danger inspired all.

CITATION: For conspicuous gallantry and devotion to duty.

Sergeant Stokes led a section of bombers against some machine-gun positions which were holding up the advance of the flank of his company. All the section except himself became casualties, but two of the guns were put out of action and their detachments killed, and then Sergeant Stokes attacked the remaining gun single-handed, captured it, killing or wounding all the crew. During all this time he was under machine-gun fire of great severity. On returning to his platoon he found his Commander had become a casualty, and he at once took command and led the men forward. His very gallant behaviour and coolness under fire of the heaviest description were an example worthy of the highest praise.