The very first Anglican Service to be held in Western Australia took place under a jarrah tree, possibly on the corner of Irwin and Hay Streets, in 1829.
HMS Success was on her way from Sydney to London when she ran aground on the rocks near Fremantle on 29 November 1829. One of the passengers, Archdeacon Thomas Scott, was marooned in Perth for twelve months, and for the first two found himself the only ordained minister of religion in the community.

With Christmas only three weeks away, he set to work to build a church; everyone helped, particularly Captain Frederick Irwin and the soldiers of the Sixty Third Regiment.

The church, built partly of wood, with rushes filling up the sides, and appropriately known as the ‘rush church’ came into being, and lasted for seven years. It was built on the corner of Hay and Irwin Streets.

Eighty people were present for the first service on Christmas Day, eleven of whom communicated, and the offertory amounted to two guineas.
Following the sale and demolition of the ‘rush church’, services were held in the Court House, which still stands in the Supreme Court Gardens and is the home of the Francis Burt Law Centre.

The Court House was opened for worship on Good Friday (24 March 1837). But this was an unsatisfactory arrangement, as the building was used for a school on weekdays, and as a court on Saturdays. However this was to last for a further eight years.

In 1838 a fund was opened for subscriptions towards the cost of a permanent centre of worship.

The Chaplain moved that a subscription book be opened and kept at the bank; the Church Societies in England gave 800 pounds.

The ‘thinly attended meeting’ promised 375 pounds, and the estimated cost of the church was 1,000 pounds. In point of fact the Trustees had difficulty in raising the sum required, which turned out to be more than 1,000 pounds.

It was then time to decide on a site. Originally the plan was for the church to be where St Mary’s Cathedral now stands.

The Rush Church had been built on the plot set aside for Wittenoom’s house because it was nearer the settlement which was clustered around Barrack Street. The meeting of 1838 felt that the site where the Cathedral now stands was more central (particularly as there were no roads, only sandy bush). But the military hospital would have to be removed at the expense of the Church. 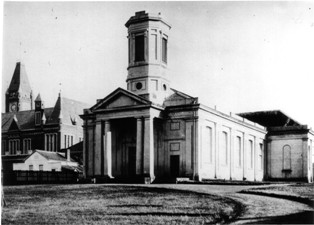 In 1841, on January first, Governor John Hutt laid the Foundation Stone of the first Church of St George. About 600 people were present when the church was opened on 22 January 1845. This building stood adjacent to the City of Perth library. The old church faced north and south and stretched from approximately the west end of the present Cathedral main entrance.
At this time Western Australia was included in the Diocese of Adelaide and the church had to await the arrival of Bishop Short who consecrated it on 15 November 1848.

On the arrival in 1858 of Mathew Blagden Hale, Perth’s first Bishop, St George’s became his Cathedral, and although it was later enlarged it did not meet the needs of the Diocese or the Parish of Perth. (The Cathedral Parish included West Perth, North Perth, Highgate and East Perth…and in the early 1900s was ministering to up to 15,000 people!)

The arrival of the Henry Hutton Parry, Perth’s second Bishop heralded the building of the present Cathedral. An anonymous donation of 2,000 pounds was given provided that a similar amount was collected. This person turned out to be Sir Luke Leake, the Treasurer of the committee.

Work began in 1879 with the Foundation Stone being laid on 2 November 1880 by the Governor, Sir William Robinson. This stone is on the north east corner (outside the North Transept).

Edmund Thomas Blacket arrived in Sydney from England on 3 November 1842 with a reputation for Church and other types of Architecture. His works include St Andrew’s Cathedral Sydney, St Saviour’s Cathedral, Goulburn, the main quadrangle at the University of Sydney and many public buildings and churches throughout New South Wales. In 1878 he was approached by Bishop Parry and others to design a new Cathedral for Perth and in 1879 his plans were accepted and work began on 1 October. Blacket died on 9 February 1883 and did not see the completed Cathedral, the only example of his work in Western Australia.

The Cathedral is built in English Victorian Gothic Revival style. It is built of bricks made from clay from what is now called Queen’s Gardens and stone trimmings (quarried at Rottnest Island).

The Architect had planned New Zealand Kauri (Huon Pine) for the hammer beam ceiling, but he was persuaded to use local Jarrah instead. Before the timber could be used it lay in the Swan River for two years to soften enough to be bent and carved into the required shapes. The inserts in the ceiling are of Oregon pine, and the ornamental inserts in the beams are of red deal.

The “Blue Stone” columns supporting the Clerestory were worked and shipped from Victoria at the suggestion of the late Architect’s son.

The Cathedral was opened and consecrated by Bishop Parry, the second Bishop of Perth, on 15 November 1888.

Blacket’s tower and tall spire were not constructed; instead a castellated and unsympathetic squat tower was constructed in 1902 and the Queen Victoria memorial bells were installed on the second anniversary of her death (22 January 1903). The Soldiers’ Memorial Chapel was added in 1923 in memory of Anglican members of the AIF from WA who fought in the Great War of 1914-18. This took the place of the Chapter House which was in the original plans.

Extensive restoration of the Cathedral took place in 2005-2008 to restore the building to its original heritage condition. 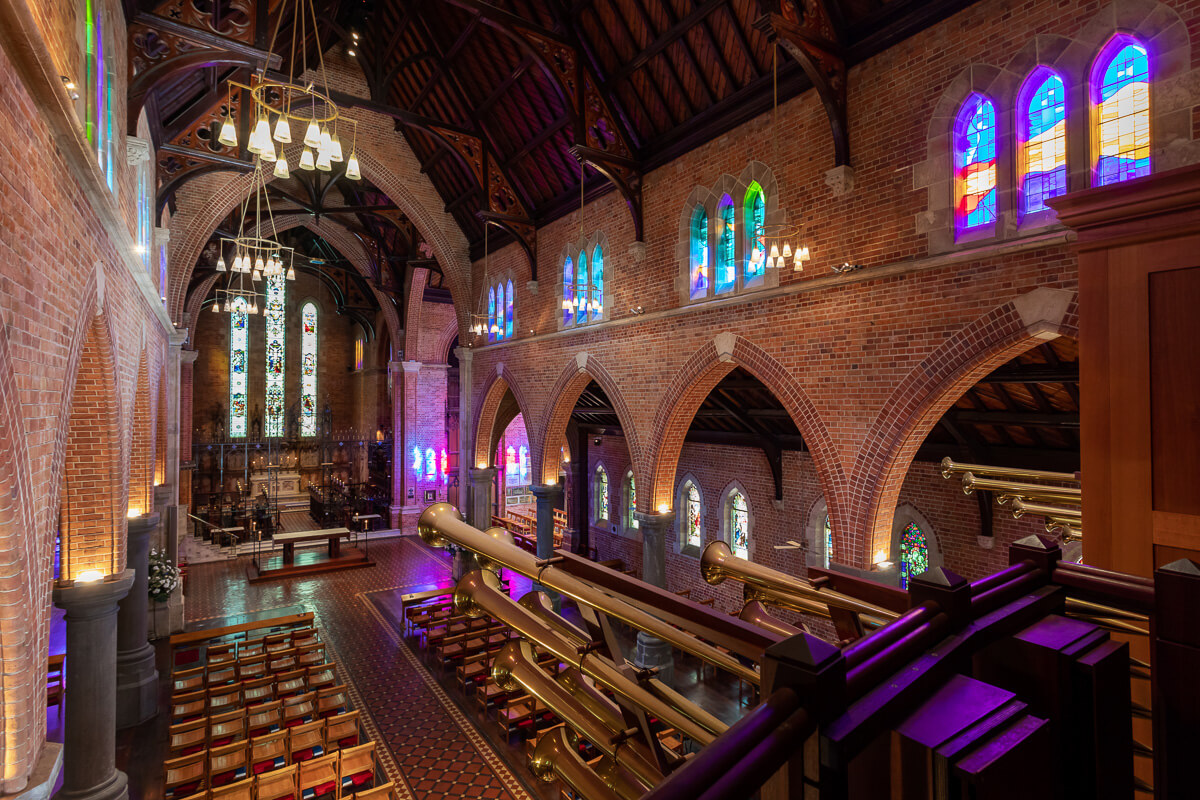 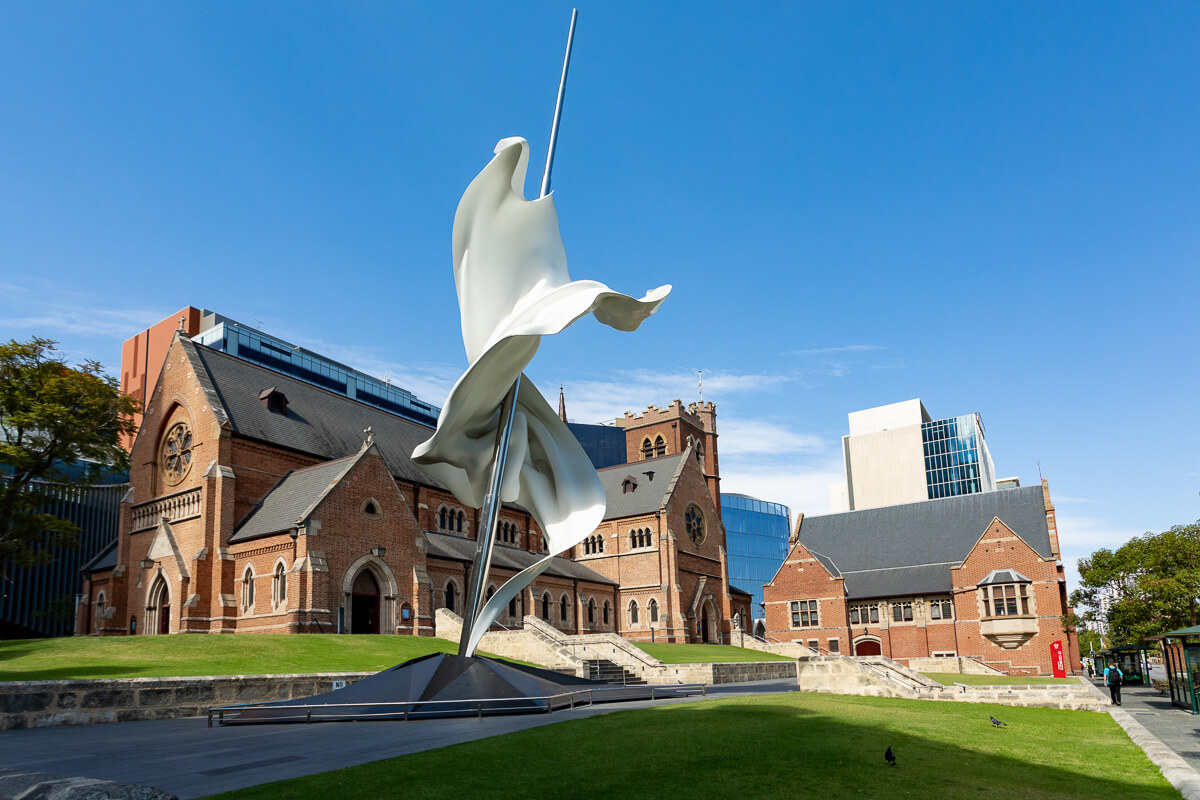 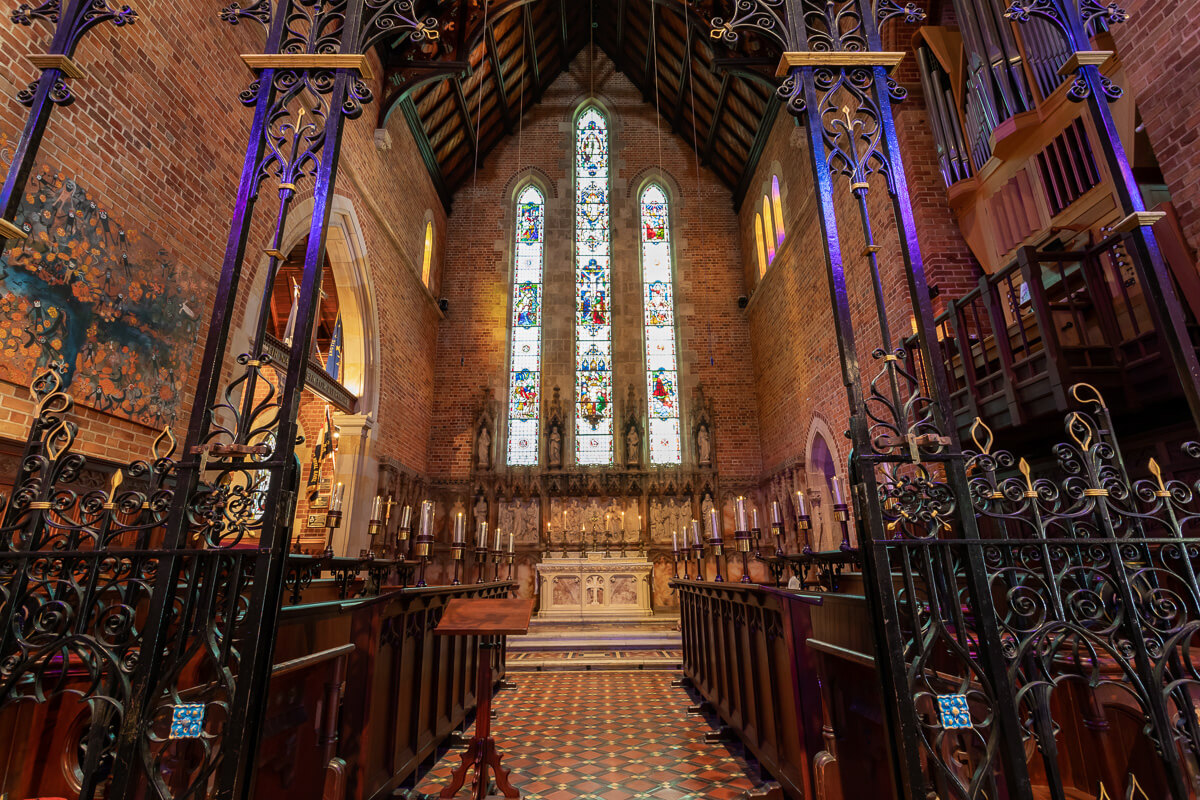 St George’s Cathedral is a unique architectural, historical, and religious jewel in the City of Perth.

Its antecedents – the Church of St George, which was located approximately opposite the current west door of the Cathedral and extended north to Howick Street (Hay Street), together with other locations of the church, including the Burt Law Centre – extend back to the earliest days of the Swan River Colony, when Lieutenant Frederick Irwin, Commander of the Perth Garrison, built a ‘Rush Church’ in December 1829 (approximately where the Department of Fire and Emergency Services (DFES) Education and Heritage Centre in the original Perth Central Fire Station is located).

The Cathedral is a Gothic Revival building of considerable beauty and majesty, completed in 1888. Its primary structures are hand-made clay bricks from the clay pits in what is now the Queens Gardens, Victorian bluestone pillars combined with South Fremantle limestone footings, jarrah beams (bent by soaking in the Swan River) and Oregon pine ceilings and infills.

Its fittings include an Italian marble reredos, with English alabaster carved inserts, containing the cathedra (throne) of the Archbishop of Perth, a Caen stone pulpit, hand-made tiled floors and many beautiful stained glass windows. It has a castellated bell tower (now repaired and complete with a new gargoyle) containing a peal of eight bells which are rung every Sunday and on other special days of the year.

This precious building was restored between 2005 and 2008 to its former glory and preserved for future generations.

The Burt Memorial Hall also underwent significant restoration between 2012 to 2014, a new roof was added and a complete refurbishment undertaken.  A memorial to Theodore and Francis Burt – both were killed in France in World War I, their father, Septimus Burt, donated this magnificent building in their honour for use by the Cathedral and the community. The restored building was reopened and rededicated at Evensong on Sunday 20 July 2014.

The (Old) Deanery housed many generations of Deans over the years, but is now the hub of the Cathedral administration. The external restoration work took place in 2010-2011 and a much needed upgrade of the internal fabric has been ongoing.

The Cadogan Song School was built between February 2016 and August 2017 and is located between the Cathedral and the Hall, and to the west of the Deanery.  The building serves as a home for the St George’s Cathedral Choir and Consort.

The Deanery Gardens was completed in October 2017 and is the final link to the Cathedral Precinct.