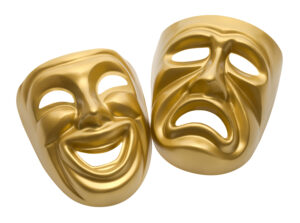 St George’s Cathedral Perth is the only cathedral in Australia to house a Theatre Memorial, in the style of Westminster Abbey’s “Poet’s Corner”.  The memorial honours past members of the theatrical world of Western Australia: our theatrical heritage.

At 5.00pm on Sunday 5 September, additional plaques to be placed on the memorial will be blessed by the Dean, the Very Reverend Chris Chataway. The six plaques honour a wide range of artists: actor-entertainer Max Kay, actress Faith Clayton, actor Maurice Ogden, ballet dancers Lucette Aldous and Alan Alder and actor-director and speech therapist (to King George VI) Lionel Logue. The ceremony, which is held close to the festal day of the Patron of the Theatre, Saint Genesius, will also see a performance in celebration of the occasion led by leading Perth husband and wife thespians; Jenny Davis OAM and Bernie Davis, Stuart Halusz and Rebecca Davis, Sarah and Greg McNeill. Others involved include actor Michael Loney, dancer Floeur Alder, actress Sally Sander and actor – historian Ivan King OAM.

Dean Chataway says that the Theatre Memorial was the idea, a decade ago, of the then Dean of Perth, Dr John Shepherd AM and the then Director of Cathedral Drama, Anthony Howes. “They wanted the heritage of our theatre to be remembered so names of theatre pioneers might be incentives for artists of the future to appreciate the creative force in the arts which we have inherited.

The Reverend Chris Bedding will preach at the service. He is Rector of Darlington-Bellevue and a practicing performing artist. He is one half of the award-winning comedy duo Pirate Church, and his musical theatre credits include Cinderella, Spamalot and Falling to the Top. Chris received the Robert Juniper Award for the Arts to train at the Second City Training Centre and in Improv Theatre, and he has served as a judge for the Performing Arts WA Awards.