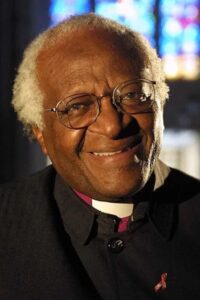 Archbishop Desmond Tutu was a giant in the faith of Jesus Christ, a lightning rod for the power of God’s love of all people to be known in the world.

Anglicans in the Diocese of Perth join with people from Southern Africa and all around the world who mourn his death and thank God for his life.

In a letter to the Australian Bishops, the Primate, The Most Reverend Geoffrey Smith, said:

Archbishop Tutu was a person of tremendous faith in God and devotion to God. He was committed to prayer and the study of the scriptures and from this came his commitment to justice for all people.

We give thanks to God for Archbishop Tutu’s tremendous example of faith-filled courage and pray for Archbishops Tutu’s wife Nomalizo Leah, their son Trevor Tamsanqa, daughters Thandeka, Nontombi and Mpho, and all their families, and for the Anglican Church of Southern Africa. We have lost a wonderful disciple of Jesus Christ who always showed his faith by his actions.

And may light perpetual shine upon him.

A Requiem Eucharist will be held at St George’s Cathedral on Sunday 2 January 2022 at 5.00pm.