An address delivered by Dr Bill Leadbetter, Cathedral Scholar, on the Sixth Sunday after Pentecost at St George’s Cathedral.

The full service can be viewed on Youtube, with the address commencing at 37:33. 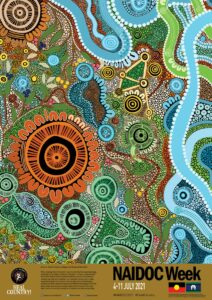 The Old Testament this morning might seem a strange choice for the beginning of NAIDOC week. The bulk of the 2 Samuel text is about the establishment of David as King of Israel. It seems to be about victory and conquest, and the consent of the governed. But there is a deeper and more significant thread.

The Second Book of Samuel belongs to a significant slab of the Old Testament that we think was edited together into a single narrative, probably some time in the fifth century BC, by a person who is known by scholars as “The Deuteronomist”. The Deuteronomist is writing some centuries after these events, drawing together older traditions and documents. His narrative reflects a particular view of the past, and of the nature of history, and the state itself.
The Deuteronomist believed that God ought to be in charge, and not any kings. The only thing that gave monarchs any form of legitimacy at all, to the author, was their faithfulness to God. They could be, as David was, treacherous and self-serving, but if they were properly devoted to God, and to the will of God, then they were acceptable.

This is noticeable in this reading at a couple points: firstly when David makes his covenant with the people, he does so “before the Lord” – that is, with God as witness and guarantor of his good faith and theirs. Upon David’s subsequent capture of Jerusalem, the writer states that David continued to grow greater because “the Lord of hosts was with him”. The point here is not the greatness: it is the recognition that it is God who is ultimately sovereign and not David.

If we turn to the epistle, we find another apparent oddity. Paul, in bringing his second letter to the Corinthians to an end, includes a passage that has puzzled many readers, what is called his “boasting passage”. It seems out of place because Paul appears to be drawing attention to himself in a way that is grandiose and inconsistent with proper humility. Paul is in fact engaging in a rhetorical exercise in comparison with Christian rivals in Corinth who stressed their own superior spiritual accomplishments, and whom he sarcastically labels “super-apostles”. Paul’s actual argument is found in v. 9: “…but he said to me, “My grace is sufficient for you, for power is made perfect in weakness.”

Paul continues in a way that might almost have been made for NAIDOC Week:
“Therefore I am content with weaknesses, insults, hardships, persecutions, and calamities for the sake of Christ; for whenever I am weak, then I am strong.”
As an Anglican Church, we arrived with the colony and our history here has been bound up with the history of British colonisation since Captain Stirling first set foot here. Not far from where I stand, a small block of wood is inserted into the brickwork. The wood is from the jarrah tree under which Christian prayers were first conducted in Perth in 1829. It represents the historic identification of church and colony that pertained here for long decades.

NAIDOC is a glorious celebration of the diversity and creativity of our First Nations. It is about sport and art and music and literature. It is about dignity, education, enterprise, achievement – and, above all, hope. The theme it has taken this year, “Heal Country”, takes as its core assumption that there is healing that needs to be done – healing the physical destruction of the land; healing the psychological and social damage that comes from the heritage of colonialism; healing “weaknesses, insults, hardships, persecutions, and calamities”. Those many of us who are the beneficiaries of that colonial legacy are encouraged by our scriptures to examine our past honestly, not to cripple us with shame, but so that we participate authentically in the proper work of reconciliation and so do our part in the call to heal country.

We cannot celebrate NAIDOC week in any spirit of authenticity unless we do as Paul suggests and honour weakness; unless we do as the Deuteronomist demands and seek the voice, and the sovereignty, of God.

One of the most important figures in the early history of Anglicanism in Western Australia is Frederick Irwin. Irwin arrived in 1829 as the commander of the garrison and first Vice-Chair of the Legislative Council. He was also a child of the manse and a pious and observant Christian. Irwin led the first Christian prayers in the colony, and until the arrival of ordained clergy exercised effective lay leadership of Western Australia’s church. He made the land available for the construction of the first church here, the so-called “Rush Church” where the site of the Magistrates’ Court is now. He was also a key member of the committee that built the first St Georges, the precursor of this building. His role in the foundation of Western Australian Anglicanism is so important that we have named a school after him.

Irwin preferred a mild policy of conciliation and cohabitation with aboriginal people, but that had its limits. While Acting Governor, he signed the proclamations declaring the outlawry of both Yagan and Midgegoroo, promising rewards “dead or alive”. That resulted in the legal killing of Yagan and the arrest and judicial killing of Midgegoroo (in Irwin’s presence) at a place not too far from this spot. Irwin intended these acts as a warning to local aboriginal people in order to intimidate them into compliance and was well pleased with the results.

A few years later, he founded a Missionary Society in England for the purpose of evangelising WA’s aboriginal population. The first missionary that it sent, Rev Dr Luis Giustiniani, was so appalled by the treatment of aboriginal people that he protested loud and long to anyone that would listen, and many that did not. He outraged polite opinion in the colony by defending aboriginal men in court. He fell foul, very swiftly, of the Anglican Establishment led by the Colonial Chaplain, Rev. J.B. Wittenoom, and Irwin’s friends George Fletcher Moore and William Mackie. After only a few years, he was dismissed his position and he and his wife left the colony.

This is the foundation upon which our church has been built. It meant well in the beginning, but tolerated neither dissent nor difference. As a church community, many of us are still torn between celebrating the achievements of the colonial past – achievements from which we continue to benefit – and deploring and mourning the horrors that came with it.

A little over twenty years ago, the great Australian historian Henry Reynolds published a book about this strange duality. He called it This Whispering in Our Hearts. The title is taken from a lecture given in 1842 by the New South Wales barrister, Sir Robert Windeyer, in which he argued strongly in favour of the European occupation of the land, because aboriginal people had never done anything to mould or cultivate the land in a way that would indicate ownership. While modern scholarship – and here I refer particularly to the work of Bill Gammage and Bruce Pascoe – has demolished this claim, it remained the rationale for the terra nullius argument that pertained for so long. But in concluding his lecture, Windeyer admitted that, even if his reason told him one thing, his conscience said something quite different: “How is it,” he asked “that our minds are not satisfied? What means this whispering in the bottom of our hearts?”

It is that whispering that Paul tells us to heed: that voice of conscience, that still small voice of God within. Colonial, and post-colonial, society has taken so much amid a parade of strength and public piety. The message of the Deuteronomist strikes a warning. Those who rule must humble themselves before God because otherwise they will craft a God in their own image, a God of convenience, who will justify horrors and atrocities committed in the name of power. That is a message for us. We need to bow before God and like Paul, heed “the whispering in our hearts.”

But there is also a louder voice of conscience. God once said to Cain that his brother’s blood “cried out” to the Lord “from the ground”. We need to hear that cry and those shouts too. God does not merely speak in the whispers of our hearts, but also in the cries of our First Nations peoples for enduring justice; the cries from Abel, the cries from weaknesses, insults, hardships, persecutions, and calamities. We may find them as hard to hear as the whispers within, but we must heed them if we are truly to live together in grace, love and hope.