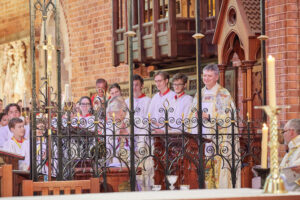 Congratulations to the Very Reverend Chris Chataway following his installation as Dean of St George’s Cathedral on Saturday 1 February.

Dean Chris was ordained Deacon in 1985 in St Peter’s Cathedral, Adelaide, and priested the following year. He has been in full time ministry ever since. He was born and educated in Adelaide, South Australia where he attended the University of Adelaide to study music. Before completing his studies he left music to study theology as an ordination candidate for the Diocese of Adelaide. Over the next 28 years, he served as a parish priest in four parishes, and was made an Archdeacon in 2005 while Rector of the Parish of Walkerville, an inner suburban parish in Adelaide. As Archdeacon, he was responsible for the City and the Port, serving under Archbishop Jeffrey Driver. In 2014, he left South Australia and moved to the Victorian goldfields in Ballarat, Victoria and served as both Dean of Ballarat and Archdeacon of Ballarat until the present.

Dean Chris is married to Heather Wray, a music teacher and accompanist, and they have four children: Anthony aged 29, Jonathan 24, and twins, Gillian and Francis, aged 18. Gillian and Francis will remain in Ballarat to study at the University of Melbourne. Jonathan is an Engineer in Adelaide and Anthony plays viola for the Melbourne Symphony Orchestra.

Dean Chris grew up in a satellite suburb of Adelaide called Elizabeth, and attended a ‘mission’ church led by Howell Witt, the ‘Bush Bishop.’ He has a keen interest in liturgical music and has composed music and hymns for liturgical use. He has a passion for liturgy, completing a Master of Theology in 2013 through Charles Sturt University specialising in Liturgical Theology, and has been a member of the General Synod Liturgical Commission for 14 years.