ORGANIST AND MASTER OF THE CHORISTERS 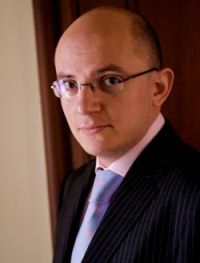 British-Australian organist and choral conductor, Dr. Joseph Nolan, has been hailed by ABC Radio National ‘as one of the great organists of our time’ and by Limelight Magazine ‘as indisputably one of the world’s finest organists’. Joseph has also been described by ABC Classic as ‘an extraordinary musician’, BBC Radio 3 Record Review for ‘his miraculous playing’ and by Gramophone for his ‘towering technique, vivid virtuosity and inspired interpretive insight’.

Twice nominated as Artist of the Year by Limelight Magazine, Joseph is the first and only organist to have been awarded Limelight’s coveted Recording of the Month for his ninth disk for Signum Classics from St Etienne du Mont, Paris, the church and organ of Maurice Duruflé. Joseph has also won Limelight Magazine’s Editor’s Choice award an unprecedented three times for disks featuring the organs of La Madeleine Paris and St Bavo Haarlem.

Joseph studied at the Royal College of Music, London, winning multiple prizes including the Canon Bark prize for most promising organ student. Attaining First Class Honours for his B Mus (Hons) final recital at the Temple Church, London, Joseph then went on to win scholarships from the Countess of Munster Musical Trust, Hattori Foundation and the Royal Philharmonic Society, which supported his advanced studies with legendary organists Marie-Claire Alain in Paris and Dame Gillian Weir in London.

Appointed to Her Majesty’s Chapels Royal, St James’s Palace, in 2004, Joseph performed on numerous occasions at Buckingham Palace, most notably giving the opening concert of the refurbished Grand Ballroom organ to a distinguished audience in 2007. Joseph is the first ever organist to be featured on commercial disk playing the refurbished Grand Ballroom organ in Buckingham Palace on the Signum Classics label in 2008 (Nolan uses the organ to amazing effect-Gramophone).

Joseph has played concerts across the globe and made his solo recital debut at Sydney Opera House in the 2017 Sydney Symphony Orchestra Season to great critical acclaim. In July 2019, Joseph returned to to Sydney Opera House, making another debut, this time as a soloist with the Sydney Symphony Orchestra (alongside star US mezzo, Susan Graham) under their chief conductor, David Robertson. The concerts received rave reviews in Limelight, The Sydney Morning Herald and ArtsHub (Australia) who stated that ‘Nolan has an unequivocally refined ear and sensitivity to French repertoire…I have never heard the Sydney Opera House organ sounding better’

Joseph has built a formidable reputation as a recording artist having recorded ten solo disks for Signum Records — winner of Gramophone’s 2017 ‘Label of the Year’ award on many of the world’s greatest organs. These recordings include the complete organ works of Charles-Marie Widor, with Gramophone and The Australian hailing the discs as ‘utterly authoritative’, Music Web International as ‘The Widor cycle of the decade’, BBC Music Magazine as ‘Swashbuckling’, and Limelight Magazine as ‘Monumental’. The Nolan/Signum Widor cycle features the finest Cavaillé-Coll organs in France, including those of La Madeleine in Paris, St Sernin in Toulouse and St François de Sales, Lyon. The disks have been awarded innumerable five-star reviews and Editor’s Choice awards in Limelight Magazine, Gramophone and BBC Music Magazine, as well as being broadcast on BBC Radio 3, Classic FM and USA Pipedreams amongst many other networks.

Very notably, Gramophone magazine awarded the final disk in the Widor cycle a Critic’s Choice for 2017, and in May 2019 awarded Joseph’s complete Widor cycle benchmark status as ‘the current yardstick for all Widor recordings’. Signum released a special celebration box-set of the complete organ works of Widor in 2019 which won another Critic’s Choice in Gramophone, a rave review in BBC Music Magazine and a ‘Recommended’ award by Musicweb International who also awarded the cycle benchmark status. Classical Source UK awarded the Widor box-set an Editor’s Choice citing-This is a landmark release. The quality of Nolan’s playing, the scope of this project…..one can only hope that this edition will lead to a full reassessment of Widor as an artist of epic grandeur and ingenuity.

Gramophone have hailed Joseph’s most recent disk from St Bavo Haarlem for Signum as a ‘wonderful accomplishment’, with the recording immediately entering the classical charts. BBC Radio 3’s Record Review programme hailed Joseph’s playing on the disk as ‘miraculous and extraordinary’ and Musicweb International named the disk a Recording of the Year 2018, declaring it as ‘possibly the organ disc of the decade’.

Joseph has also collaborated in concert with some of the world’s finest trumpeters, including Alison Balsom, Crispian Steele-Perkins and David Elton, Principal Trumpet of both the London and Sydney Symphony Orchestras.

In 2008, Joseph was invited to take up the position of Organist and Master of Music at St George’s Cathedral, Perth, Western Australia. Under his leadership, the Cathedral music programme has been described as ‘elite’ and ‘world class’ in The Australian and The West Australian newspapers. The Cathedral choirs have regularly performed on ABC Classic, whilst the Cathedral Consort has performed at Perth Festival, Musica Viva and with WASO, The Hilliard Ensemble, the Academy of Ancient Music and The King’s Singers.

Dr Nolan enjoys a significant reputation as a choral conductor. He has conducted the West Australian Symphony Orchestra with the St George’s Cathedral Consort in performances of many of the great oratorios such as Bach’s St Matthew Passion. These concerts have been recorded live for broadcast on ABC Classic, garnering rave reviews in The Australian and The West Australian newspapers. Limelight Magazine hailed the WASO performance of Handel’s Dublin Messiah at Perth Concert Hall (April 2022) writing ‘Joseph Nolan leads a remarkable Messiah, which will be talked about in years to come’.

The Government of France awarded Joseph the medal of Chevalier de l’ordre des Arts et des Lettres for services to French music in 2016. An Honorary Fellow of the University of Western Australia, Joseph was awarded, via examination, the University’s prestigious higher doctorate, the Doctor of Letters, in 2018. Joseph’s career has also been the subject of substantial interviews on Radio National (Australia) and in features within Gramophone, Choir and Organ, The Organ and The Australian.

Forthcoming engagements in 2022 see Joseph featured as concerto soloist in Barber’s Toccata Festiva with WASO under chief conductor, Asher Fisch, and a debut national tour as a featured solo artist with the New Zealand Symphony Orchestra alongside conductor Alexander Shelley and pianist Gabriela Montero. Joseph will be returning to La Madeleine, Paris, in January 2023 to record the complete organ works of Alkan for Signum Classics.

At school, Holly was a violinist, pianist and oboist. She was also selected to workshop some of her compositions with Richard Gill and members from the SSO; was short-listed for the film composition competition Tropscore; and represented WA at the ASME conference where her composition was premiered by the Australian String Quartet. Since leaving school, Holly has written music for the Royal Schools Society, and for the CSIRO for some of their short science films; and was selected to workshop one of her compositions with the Flinders Quartet in Melbourne. In 2017, Holly held Wesley Uniting Church’s organ scholarship and travelled to Sydney for the Gondwana Choral Composer School and to Oxford University to study choral composition. In 2018, Holly held organ posts for the Royal School of Church Music camp, Swanbourne Church of the Resurrection, St. Mary’s Anglican Church in South Perth, the WA Youth Orchestra, the Winthrop Singers, and the St. George’s College Girls’ Choir and Chapel Choir. Holly also graduated with an undergraduate Music Specialist Studies degree in composition from UWA and First Class Honours in organ performance from WAAPA.