Following the extensive restoration works to the Cathedral, Forecourt, and Hall from 2005 to 2014, a permanent home was needed for the Cathedral Choirs to rehearse and prepare for services and also to house the Cathedral’s extensive Music Library.

The Very Reverend Dr John Shepherd AM, Dean Emeritus (Dean of Perth from 1990 until 2014) first conceived the idea of a “Song School”, as found in many Cathedrals in the United Kingdom, as he surveyed the site of the demolished former Dean’s Vestry between the Cathedral and the Hall.

After consultation with Palassis Architects, a concept plan was developed and PACT Construction began building work in February 2016. The building was completed in August 2017, and officially opened by the Right Honourable the 8th Earl Cadogan, KBE on 13 October 2017.

The building is partly subterranean, and located to the north of Burt Memorial Hall, with direct access to the lower level hall, with the main entrance accessible from the plaza level. The Song School’s design is inspired by the Cathedral lancet windows, whilst the transparency of the glazed structure ensures that important view lines towards the Ascalon sculpture are preserved. Locating the Song School partially underground minimises the building’s footprint, and ensures that existing sight lines are maintained. – Palassis Architects

Delicately placed to the north of Burt Memorial Hall on St Georges Terrace within proximity of four existing buildings (three of which are heritage listed), the brief was unique – to design and construct a building that blends seamlessly with the surrounding architecture.  Fittingly, PACT had been conducting a rehearsal of its own, already working on the Church House project next door. This gave the team extensive local knowledge of the surrounding buildings and site conditions, placing PACT in the best possible position when confronted by the challenges that come with working in close proximity to heritage-listed buildings – of which there were many.  To prevent structural movement and damage to the surrounding buildings imposed by the structural loads of the new building, extremely delicate handling was required when carrying out the underpinning and grout injections under the Cathedral (1888), Burt Memorial Hall (1918) and the Deanery (1859). – PACT Construction

The Cadogan Song School has been awarded the: 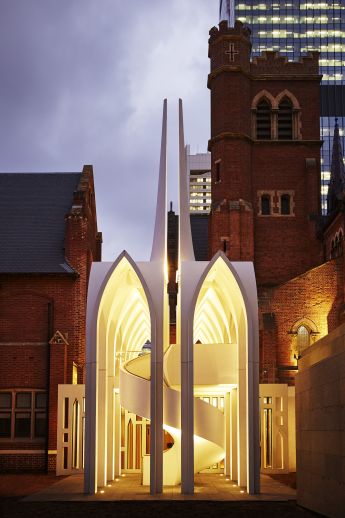